The integrity of an earthing system is critical to its effectiveness as the prime reliability and safety mechanism of an electrical installation. Measuring the electrical continuity of earthing conductors in a power installation, such as a high voltage (HV) substation, is a necessary verification test of the earthing system condition.

The difference between an effective and ineffective earth connection could be as small as a few mΩ. A 1kA fault through a 10mΩ joint results in 10kW of heat, which could immediately destroy the connection, and result in an extremely hazardous scenario.

The CS3 is a milli-ohmmeter that measures the DC resistance between a main earthing point and other metallic structures in an installation, enabling integrity testing four times faster than traditional methods.

It has the unique capability of overcoming electrical noise, yet still providing continuity measurements within an in-service earthing system. It is now possible to detect potentially compromised earth connections in an efficient, cost-effective way.

The award-winning CS3 represents the culmination of years of research and experience. Safearth has developed the CS3 to meet needs of earthing system installers, in-service inspectors and testers.

Why did Safearth manufacture the CS3?

Safearth’s fundamental business is earthing and bonding services, ie. field testing and design services. In the early 1990’s, Safearth pioneered a range of new test methods, including continuity testing. As the test method developed, Safearth found no instruments available that would provide the necessary combination of features, such as accuracy, portability and battery life. Consequently, Safearth developed their own instrument, initially only for their own use. Over time, as the test method became more widely used across Australia, other organisations expressed interest in the instrument, and in 2014, Safearth released the first commercial version of the CS3, winning an Engineering Excellence Award for it’s design. Safearth has since produced more than 300 units, which have been widely sold across Australia and overseas, in particularly the USA, where Safearth also has an established presence.

What makes the Safearth CS3 unique?

Safearth’s CS3 is the first instrument developed specifically for earthing and bonding continuity testing, and so is the only one that meets all the needs of the testing.

The below comparative illustrations provide some indication of these relative benefits. 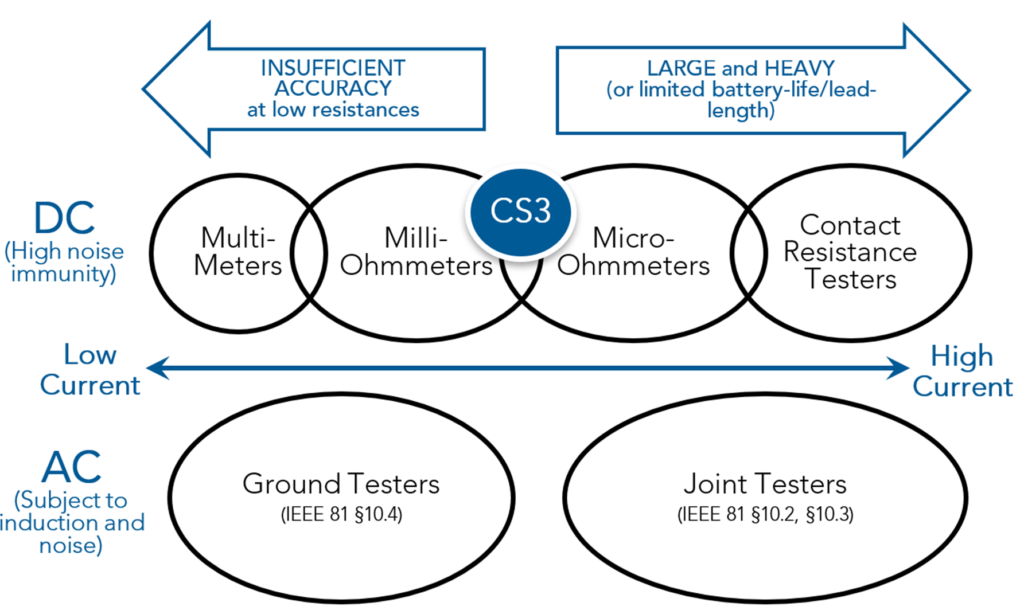 Joint Testers generally suffer from low accuracy due to interference and induction; are designed for single joint testing to prove thermal rating; are typically large and not portable.

Contact Resistance Testers are high accuracy, but designed for single joint testing; not usually portable; are limited by lead length; and are generally heavy.

Micro-Ohmmeters are high accuracy, and portable, but generally designed for transformer winding measurement or other in-situ testing; are limited by lead length.

Milli-Ohmmeters have lower accuracy and are also usually limited by lead length.

Multi-Meters are typically two-wire with very low accuracy and are limited by lead length.

Safearth CS3 measures using just enough current to provide sufficient accuracy in the range that is most appropriate for identifying poor connections, whilst remaining small, portable and not running out of batteries mid-test.

Lead length. Most of the lower cost alternatives are not designed for or specified for lead lengths of more than a few metres. Many only include 2-wire measurement, and therefore lead length cannot be extended. The CS3 can easily measure over leads of 200m or more, which can be critical when testing large installations. CS3 comes with optional leads of 20m, 80m and 180m, all of which are on ergonomic hand reels.

Ergonomics. Once the CS3 base unit is set, with reference connected and lead deployed, the user only carries the hand unit and probe, weighing just 600g. The probe is also large enough to be comfortably handled whilst wearing gloves.

Portability. Some other units are similarly portable, however they achieve this by using lower current (and therefore achieving lower accuracy) or by having very short battery life. Durability and robustness in smaller units is also often compromised.

Battery Life. The CS3 will operate easily all day, and perhaps for several days, depending on your testing duty cycle. Recharge is easily achieved by plugging in the CS3 to a mains supply. The hand unit is charged from the base unit during the testing, between measurements.

Noise Immunity. Testing in a live electrical substation exposes the test equipment to substantial noise due to electromagnet coupling and then presence of currents in the earthing system. Even installations are often subject to interference from other local sources, such as railway current, galvanic or cathodic protection currents, welders, and power system harmonics from inverters and generators. The CS3 has been designed to operate despite the presence of such noise. No other device on the market has the noise immunity of the CS3.

Accuracy. You need sufficient accuracy to determine the difference between a good a bad connection, which could be only 1 or 2 milliohms. Other products will not be able consistently provide that level of accuracy.

Australian Made. The CS3 is the only Australian designed, manufactured and owned instrument on the market. Buying Australian Made supports Aussie businesses, and also means that the very best support is available locally. Training (in the instrument, and in the testing methods), spare parts, servicing and support are all provided from our Newcastle office.